Give our fluffy Japanese pancake recipe a go

Known for their fluffy texture, Japanese pancakes aka Soufflé pancakes don’t taste dissimilar to your average American pancake. What is different, however, is their height – these things are thick – and the way in which they wobble about on the plate. Seriously, there’s something quite mesmerising about watching a Japanese pancake jiggle…but we’ll leave you to explore that in your own time.

So, how do you make them? Well, you’ll be pleased to know that Japanese pancakes require similar ingredients to your average pancake. The only difference is the fact that you’ll need to substitute plain flour for self-raising flour and add a little more sugar to the mixture. From there, you’ll also need to get your hands on some crumpet rings to give your Japanese pancakes their signature shape, but we’ll talk you through that below.

What is a Japanese Pancake?

As the name suggests, the Japanese Pancake, also commonly known as a Soufflé Pancake, is a puffy whimsical pastry that originated from Japan and has been recently winning the hearts of many all over the world.

Exceptionally thick, airy, and soft, the souffle pancake seems to be defying the physics of pastries: As an airy vanilla batter is cooked in a ring-like pan, more air bubbles are formed inside the batter; leaving it lightly toasted on the sides and fluffy and cloudlike in the centre.

Adorned with toppings like custard sauce, chewy boba pearls, fresh (often handpicked) berries, maple syrup, and melted butter, each pancake shows off its vibrant colour scheme whilst maintaining its structure and presentation of being served in tall stacks.

These fluffy Japanese pancakes have also become a hit and a rapidly-growing food fad online, with over 50,000 photographs tagged under the #soufflepancake tag on Instagram. It is without a double that these pancakes, in all their sweet and springy texture and colourful dressings, have become a great social media success, leaving many wanting a taste of these inviting desserts.

The History of the Japanese Pancake

The origins of the Japanese Pancake are said to have dated back to 16th-century Japan. Sen no Rikyū, the founder of the Japanese tea ceremony, char-grilled flattened dough after mixing flour with water and sake, then spread sweet miso over the savoury pancake before being rolled and cut into bite-sized portions.

The pancake then earned the name “Funo-yaki” and during the zenith of its popularity, Funo-yaki speciality shops were constructed and set up in different parts of Japan. However, towards the end of the Edo period in the 1800s, the pancake tradition had already completely disappeared.

Towards the latter years of the Taisho Era (1912-1926), Western influences supplanted the kitchens and dishes of the Japanese masses, bringing about prime ingredients such as Worcester sauce that the Japanese immediately loved and openly embraced.

Thick pancakes called “Monji-yaki” (“letter cooking” in English) that originated during the Meiji-era were done on a teppan with watery, seasoned pancake dough, and finished off with Worcester sauce and generous portions of scallions –– seemingly paying homage to the Western flair and influence. As such, this new Western-twist style of pancake rose to popularity and was referred to as Issen Yoshoku (one-pence Western food), or Negi-yaki.

During the aftermath of World War II in the late 1940s, many Japanese, particularly those in Hiroshima affected by the notorious atomic bomb, turned to Negi-yaki to satisfy their hunger and fill their empty stomachs amidst the nationwide scarcity and shortage of food. As the government started confiscating kitchen appliances for weaponry, many Hiroshima citizens had to make the most of what they had –– through discarded metal sheets amidst the war-torn scene, many Japanese baked these wafer-thin pancakes stuffed with chopped cabbage to ease their hunger and ultimately, survive. This then led to the creation of the first “Hiroshima-yaki.”

In other parts of Japan, however, many people started to make use of the ingredients that were either available or set to their taste; thus, giving rise to the general name for  Japanese pancakes –– “Okonomiyaki” or as translated in English, cook as you like.

The popularity of the Okonomiyaki rapidly rose after a Japanese Pancake restaurant in Osaka introduced mayonnaise as a topping that soon became an important facet of the Osaka-style Japanese pancake.

Although both the regular American pancakes and the Japanese pancakes are mainly composed of almost the same ingredients (namely milk, eggs, and flour), one crucial factor that differentiates the two from one another would be the overall fluffiness and texture of the pancake. While Japanese pancakes are fluffier and much more cake-like, regular pancakes lean towards a flatter and more dense texture.

Ultimately, the texture of these pancakes depends on the amount, type of flour, and the usage of certain ingredients. Regular pancakes are often made with whole eggs, buttermilk, and a greater amount of plain flour as compared to their Eastern counterpart. Japanese pancakes, on the other hand, make use of a lesser amount of either wheat, millet, or buckwheat flour as the eggs in the recipe are separated –– beating only the egg whites to create a meringue-based batter (similar to a soufflé, thus the name).

The key to achieving that fluffy Japanese pancake would be to cook it at a low temperature for a relatively long amount of time; thus, transforming it into the soft, light, marshmallow-like texture that we have come to know of.

1. Add your sieved flour and baking powder to a bowl, along with the sugar. Combine thoroughly before making a small well at the centre.

2. Add your eggs to the well, along with the oil, and begin working your flour mixture into the centre. If you’re using vanilla essence, now is also a good time to do so

3. For the best result, we’d recommend using a non-stick pan for your Japanese pancakes. Heat to a low temperature and place your crumpet rings (cookie cutters could also work) in the centre of your pan.

4. Place a small amount of oil inside the ring before adding the pancake batter – aim to fill it around three-quarters full.

5. Place a lid over your pan and leave the pancakes to cook for ten minutes, or until you see small bubbles begin to appear on the surface.

6. At this stage gently flip your pancakes – we’d recommend using a plate to assist you with this – and allow them to cook for a couple more minutes.

7. Stack your pancakes on a plate and top with whatever toppings take you fancy. We love maple syrup and stewed berries, but it’s totally up to you. Even dusting with some matcha powder to add that extra depth in flavour. 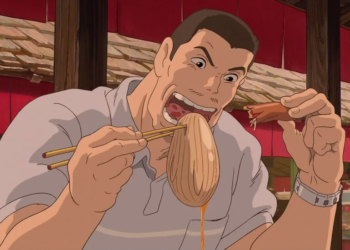