A sentō (銭湯) is a type of communal bathhouse found in Japan. These establishments were once the norm for people to visit for daily bathing routines, but since the second half of the 20th century when bathtubs became a more standard feature in Japanese homes, their numbers have decreased significantly. According to a survey in 2018, there are now fewer than 4000 bathhouses remaining countrywide. Still, dedicated bathhouse regulars insist that sentō are not just about bathing—they carry social and cultural importance, too. The time spent bathing and relaxing with fellow community members in such an intimate environment has a clear influence on maintaining strong relationships.

A common feature found throughout many bathhouses in the Kanto region of Japan are the large, painted murals of Mount Fuji looming over the premises. The very first mural was painted in 1912 in the Kikai-yu bathhouse in Chiyoda, Tokyo. The painter, originally from Shizuoka, wanted to make customers happy by painting a symbol of his hometown for all to enjoy. The mural drew attention and its popularity inspired other bathhouses to follow suit. Today, there are only three remaining mural painters left in Japan, including 38-year-old Tanaka Mizuki—Japan’s first and only woman mural painter.

What is a riso print?

These prints use risograph technology, a method of printing developed in Japan in the mid-1980s. It can be described as a mix between screenprinting and photocopying. The risograph process produces prints with extremely vibrant, crisp inks. Sometimes these inks overlap during the printing process to create interesting and unique details—these slight variations and colour shifts are part of the charm of riso, adding character and a handmade-feel to the art. These soy-based inks also have a lower environmental impact.

Please note: Riso soy ink is similar to newspaper printing in that they never get fully absorbed into the paper, so take care not to handle the print or touch the ink directly to avoid any risk of smudging. 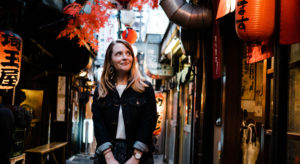 Hello, everyone! My name is Geri Coady—I’m an illustrator and designer with a passion for Japanese travel, food, and culture. Seven years ago I worked as an art director in a Canadian advertising agency, but for the past six years I’ve been working as a freelance illustrator in Nottingham, England, with clients located around the globe.

My other interests include photography, coffee culture, and running. I study Japanese daily to work toward my goal of being fluent. In February of 2017, I appeared in the TV Tokyo program 「世界！ニッポン行きたい人応援団」also known as “Who Wants to Come to Japan?” in English. You can read more about my experience filming for Japanese TV on my blog post.

Items shipped outside the UK are sent via Royal Mail International Standard Airmail. No tracking codes are available for this service. We aim to ship out your order within 3 working days of purchase unless your purchase is a pre-order. For pre-orders, please check the details on the item’s page for more specific wait times. Depending on your location, items can sometimes take up to 21 working days to arrive (including Japan, Australia and the USA), however, it's generally around 5-7 working days.

You can return your product within 30 days of receipt and you will give you a full refund. The item must return to me in its original saleable condition (please note that my wrapped print packs must not be opened). The customer is responsible for the shipping and additional postage charges. Please contact us before you send your item back. If your item is damaged on arrival, please let us know by email and then send it back to me within 14 days of the delivery date. Once received, you will be sent a new one. In this instance, return postage will be refunded to you.

If you want to swap your product for a different design (same price value), please contact us.

We can not take responsibility for any import taxes and duties related to your country.

Do you have a question?

Drop us a line by filling in the form below.