Beyond the cracked marble hotel lobby fountains and abandoned shopping malls lies a world that both owes vaporwave its respect whilst also being indispensable in carving it. Certain TV shows and movies from the 1970’s right through to the modern-day played a large part in forming the aesthetic of our beloved micro-genre.

Writer, Bret Easton Ellis, penned tales of rich 80’s youths drowning in blonde LA luxury, as well as the façade of office life used by a psychopathic murderer. The former, Less Than Zero (1985), became a film two years after the author’s debut book was published. While its reviews are hardly pleasant, the pool parties and all-around expensive Californian highlife are a clear depiction of what vaporwave criticises. Ellis makes a similar critique in the book, showing the deep numbness, boredom, and dark avenues that this lifestyle can lead to. The same can be said for the latter, which is undoubtedly his most famous book, American Psycho (1991). Between the books, his focus shifts from youthful house parties to trendy office workers. Though, once again the surface lifestyle is simply a mask for the horror of the individual that dwells underneath. Its main character is like a chopped and screwed American ideal. Rollerball (1975) depicts a future where capitalism is at a global peak, which is reinforced by the sport that the movie is named after. The sport involves two teams that rollerblade and ride motorcycles around a ramped ring in order to plunk a ball into each other’s goal. And yes, they are allowed to kill each other.

The game is designed to show the masses that individuals cannot win, so the ruling elite can remain safely at the top of their hierarchical ladder. The beige futuristic 70’s lounges and executive party suites seem to come straight off of a vaporwave album cover. The dark undertones that criticise the ruling class’ ideology line up nicely with vaporvalues.

Elements of movies and series like Back to the Future 2 (1989), Seinfeld (1989), and anything by the director, Nicholas Winding Refn, hold acres of reference material. The scene in Back to the Future 2 where Marty meets his future son at the “retro café” in the year 2015 is iconic. Strange, hanging televisions showing the fuzzy faces of old celebrities like Michael Jackson act as waiters, dispensing (Saint?) Pepsi and playing glitchy Muzak. Later on, Marty visits his future home, where his son watches a bunch of TV channels at once on a large projector in a clean-cut, vaguely futuristic living room.

Nicholas Winding Refn, most famous for directing Drive (2011), pushed the closely linked synthwave sound as well as the vaporwave aesthetic. He may not have been aware of it, but those micro-genres were just rising out of the mysterious ashes of non-existence when Drive was released. The influential soundtrack to Drive includes tracks like Kavinsky’s “Nightcall” and College & Electric Youth’s “A Real Hero”.

Something that resonated in his later films, Only God Forgives (2014) and Neon Demon (2016), as well as Drive, is his addiction to neon. His third film even uses the word in its title. Softly illuminating the dark violence in his films is the sweet electric glow of neon, which happens to be a staple of the vaporwave aesthetic. Scenes of Neon Demon might as well take place in one of the vectorised digital landscapes of Eric Weidner’s P R O J E C T • C O L L A G E on Tumblr. Come to think of it, is Ryan Gosling a vaporwave poster boy? Because he also stars in Blade Runner 2049 (2017), where giant holograms and towering billboards exist in the same sweet neon pink light you might find a Helios bust bathing in on Reddit.

Going by the usual repeating animations on vaporwave YouTube mixes, it’s no surprise to say that anime is a profound influence. Neon Genesis: Evangelion, for example, strikes the chord loud and clear. With a sunset colour pallet over a dystopian Japan, machines fight an alien onslaught whilst the humans inside struggle with themselves. The Simpsons have also been swept up into the pink and purple, with its own genre forming (within vaporwave?) called – you guessed it – Simpsonswave. A melancholic Bart appears as the herald for the micro-genre, while much of the artwork from the show is used alongside songs/mixes on YouTube.

Thanks to all the Redditors awesome enough to share their thoughts and ideas of vaporwave media. Though vaporwave’s explosion in popularity may have waned from the public eye since 2012, shrapnel from the blast seems to have entered every type of media. The aesthetic seeds bundled inside that grenade have been growing steadily. Even my local pub now has a Greek bust on the bar, lit by eerie, green neon light. 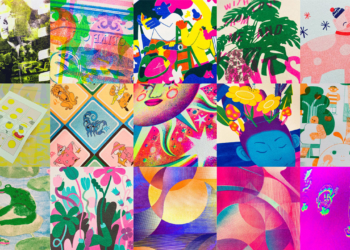 Vibrant, powdery, and charmingly flawed what’s not to love about Riso prints?  Risograph printing is a Japanese creative printmaking technique that gives the maker the... 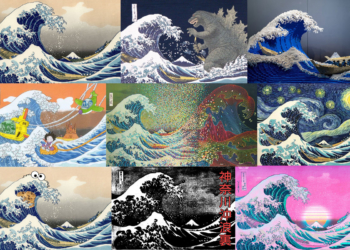 The Evolution of Hokusai’s The Great Wave off Kanagawa 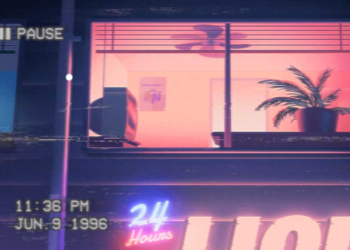 Vaporwave Art: Behind the Vapour

2400 years ago, during the 4th Century BC, Alexander the Great’s conquest across Asia diversified Greek culture, throwing off the Classical cloak and wrapping themselves...