Makoto Shinkai seems to have nailed the formula for creating legendary masterpieces in the Anime film genre. If you want to see high-quality animation, you can never go wrong with one of his works. Most would agree that his productions are at the absolute top of the anime movie landscape in terms of animation quality and scenery.

Time and again, you will be captivated by his films’ incredibly well-drawn places and situations, complemented with emotional scores that will shock your system in the most impossible manner. Shinkai is the master of constructing storylines that can aid you on days when you simply want to weep.

Why is Makoto Shinkai so popular?

When it comes to production value, Shinkai’s films are excellent introductions for individuals who are familiar with the work of popular Western animation companies such as Pixar. Characters who flow easily, minute details meticulously drawn to the finest lines, music straight from the opera house, and storylines that appeal to a wide range of demographics and ages are all evident in his work. Simply said, he excels at the fundamentals.

His ability to root you in reality, even through his fantastical and magical storytelling, is what defines him the most. You’ll be in amazement when you marvel at the stunning landscapes that serve as the background for his characters. Although he constantly mixes otherworldly sci-fi aspects into his films, real locations serve as the backdrop for these occurrences.

Shinkai and his colleagues travelled over Japan shooting pictures and performing ocular visits to capture the most minute aspects of a scene. It is the combination of these little details that produce the eye-candy that attracts to viewers. His scenes are photo-realistic spectacles that lift the animation in his flicks above the competition. They transport viewers to modern-day Japan, since many locales surrounding Tokyo are identifiable, to the point that admirers of his work have challenged him to shoot images in the precise locations he portrays.

In a time where anime and visual media are regarded as a form of escape, Shinkai’s contrasting method makes his work even more appealing to audiences. He takes the same kind of realism even further by blending it with relatable characters and storylines that will truly move you. The characters in the films are simple to connect with, whether it’s a self-insertion of the individual, a friend, a relative, or an ex-lover of yours.

Shinkai’s works are notorious for striking emotional chords in audiences, causing them to laugh, weep, and experience the many sentiments these people go through.

Your Name is the claim to fame

Perhaps his best and most famous film, Your Name ticks all the boxes when it comes to a trademark Shinkai film. Set in both Tokyo and rural Japan, Your Name is a story about a boy and girl whose lives are intertwined through space and time.

A city boy in his high school years and a girl who dreams of living in the bustling streets underneath the flashing lights wake up in each others’ bodies. Slowly realizing this, they slowly find ways to try and reach each other, searching for answers behind the strange phenomenon which set the precedent for the film.

The plot, although peppered with sci-fi aspects, is much more straightforward than the opening idea suggests. As predictable as it is, the film’s production design blasts it out of the water since the imagery is compelling, masking any lack of character depth or simplicities. It is one of the most realistic depictions of the two locations featured in the film. Makoto and his team photographed even the most ordinary places familiar to commuters, such as inside cafés, packed subways, and even little alleyways. The level of detail is mind-boggling, and it really is a hallmark that indicates it is his film.

The rich colors and motions of everything in each scene provide life to every moment and offer you something to look at wherever you look. Furthermore, the accompaniment propels the story and adds that additional oomph that is present in both the saddest and happiest stories. This film will make you feel a wide range of emotions. And that is Makoto Shinkai’s bread and butter.

It is hard to believe this film came out in 2016. With a great ensemble cast of relatable characters, the story of Taki and Mitsuha is one that will be an all-time classic.

The Garden of Words: Shinkai rounding into form

Stripping it down further, The Garden of Words is where Shinkai truly explores what led him to create his Magnum Opus. Created three years prior to Your Name, this film’s strongest asset is its stunning visuals. He flexes his artistic talent here, fully immersing viewers into a luscious Tokyo Garden.

Each scene looks like a piece of art from a museum, whether it’s the panning out into the many greeneries and lakes, or the breathtaking bridges and landscapes. You’ll be amazed at the amount of fleshed out detail and attention placed into them. The film’s simplistic and underdeveloped characters are where it may fall short.

It is, as the title suggests, a scenario in which Takao, a 15-year-old shoemaker, and Yukino, a 27-year-old lady lost in the Tokyo rush, hold discussions. It has been critiqued for being perhaps uninteresting and half-baked, but it’s also difficult to anticipate too much development of people and their relationships in 46 minutes. As intriguing as the dynamic of an adolescent kid communicating with an older lady is, their discussions can be viewed as a snoozefest.

Another criticism is how rapidly their connection grows, culminating in a melodramatic confession at the conclusion of the film. Again, it may go either way, as you’ll either adore or dislike the quantity of simplistic and plain conversation spoken between the two lost souls.

However, from a visual aspect, it is nothing short of magnificent, as even if you don’t find it very engaging from a story standpoint, the atmosphere and aesthetics more than compensate for any lack of characterization.

5 Centimeters Per Second to none?

Many consider his defining work to be 5 cm/s, which is also the pace at which Sakura leaves fall from trees. It’s a terrific balance between the two films listed above, combining the hyper-realistic features of Garden with the character writing of Your Name. As the first of the three films, it encapsulates Shinkai’s theories to their core, concentrating on the scenery and a basic no-frills storyline with no out-of-the-ordinary features like time travel.

5 Centimeters Per Second is primarily a romance drama about two star-crossed lovers, but it also tackles the connection of childhood friends Takaki and Akari, who are let down by the situations they are placed in. This is a circumstance that is extremely similar to our own personal relationships. Those who have been injured by long-distance relationships should close their eyes or prepare to be hurt again.

This is the most genuine and vulnerable of the relationships between the characters Shinkai has written about. It’s a tragic train voyage that will leave an impression on you whether you’ve been placed in the scenario the protagonists have encountered or not. It’s paired with one of the most delicate soundtracks and melancholy snow atmospheres.

Weathering With You through it all

Weathering With You is his most current effort and a sequel to perhaps his finest picture, as well as his most recent feature. Nature has always played an important role in all of Shinkai’s works. Rain, snow, stars, and comets are non-negotiable components that add emotional and figurative bows to his titles.

Makoto Shinkai went all out with the elements in this film, concentrating fully on a girl’s power to alter the weather and provide sunlight where it is required. But, as we might assume, with great power comes tremendous responsibility, and as we shall see later, the conflict occurs after the two major characters’ relationships solidify. This is the Shinkai structure’s natural flow.

It is an excellent animation and, dare we say, companion piece to Your Name, while being shockingly identical in structure and attitude (just look at the posters of the two films and you’ll see what I mean). Although it is not as sophisticated or rewatchable as Your Name, its pace, character designs, animation, artwork, scenery, and soundtrack are all excellent, as is to be anticipated.

So, what can we expect from the acclaimed filmmaker in the future? The trailer Makoto Shinkai’s next movie Suzume no Tojimari was just released. Shinkai seems to be sticking to his big guns, with the fantastical and rural locations seen in Your Name playing a large role in the film, which is planned to be released on November 11, 2022.

Another important aspect seems to be time travel, since the sole material published about the film includes a plea from a time traveler to the main character to locate a door. You will never be dissatisfied with the overall quality of his works, thus we are fortunate to be gifted again this year by the wonderful Makoto Senpai. 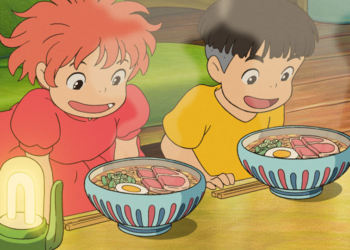 Food in Anime: A Symbiosis of Colour & Culinary Curiosity

Ever wondered what Ponyo's favourite noodle dish tasted like? Ever thought what Pikachu was snacking on from Brock’s satchel? Ever wanted to try the variety...