Cozy up this autumn with hot beverage and a Japanese novel.

I am still new to the world of crime thriller novels, especially Japanese literature. Recommended or not, some books do it for me, whilst others just don’t. I was never too familiar with that many Japanese authors beyond Murakami. But after trying out Osusume Books, a monthly subscription service of handpicked Japanese books delivered straight to your door, I was hooked!

When I first picked up The Devotion of Suspect X, I didn’t know what to expect. I hadn’t heard anything of Keigo Higashino nor how popular his book was but I figured you have to start somewhere…

The Devotion of Suspect X by Keigo Higashino

Set in Tokyo, The Devotion of Suspect X is a story about the quiet lives of a single mother, Yasuko, and her child, Misato. Immediately after she divorces her abusive, alcoholic ex-husband, she starts anew in a Japanese-style lunch box shop.

But the peace doesn’t last long and the story takes a drastic turn when one fateful evening, Yasuko’s ex-husband, Togashi, shows up at her doorstep uninvited. In the heat of the moment, a struggle breaks out between the two, eventually leading to an accidental murder by Yasuko and Misato. A knock on the door reveals their next-door neighbour Ishigami, who overhears the entire commotion and offers to help them dispose of the body.

Following the footsteps of the suspects and the police, Higashino narrates the story by flicking between the perspectives of the characters, offering a unique take on their side of the mystery. The blind spots that appear in the investigation add to the compelling angle of the story, and although the reader knows exactly what has happened, the methods Ishigami uses to disguise the crime are revealed towards the end of the novel.

When the investigation reached its boiling point, what I thought I understood about the crime became unclear. Higashino did a good job of keeping me engaged throughout the read; I found myself just as curious as when I began. He also kept some of the character’s suspicions, namely the detectives, concealed from the reader, adding more suspense to the mystery.

The straightforward, nonchalant writing style is what I found most deceiving. The events are described in a level-headed manner, with the murder and the cover-up portrayed as if it were a normal happening. This made me feel as if the author put less significance on the act of murder itself, but rather on the complicated nature of human relationships. In retrospect, the moment Yukawa’s suspicion gained its corroboration, the consequences that Higashino fated for Ishigami, and the choices leading up to the aftermath show just how well-drafted this novel was. The heinous crime in contrast to the unveiling of the culprit’s mask truly made this piece an outstanding read.

The Devotion of Suspect X by Keigo Higashino lingered in my mind days after I finished reading. The relationships between the characters, their intentions, down to the very fabrication of the crimes: I did not see the plot twist forming before it eventually swept me off my feet. If I had to suggest an improvement, it would be a more detailed account of the character’s thoughts, in particular, Yasuko’s internal struggles. The perpetrator’s emotions are somewhat assumed by the reader, for instance, there wasn’t much detail on how Misato was handling the situation despite being involved in the initial crime.

Overall, I thought that the secondary characters supported the protagonists well. Manabu Yukawa was definitely the most interesting of them all. Doubling as an intuitive friend and a highly intelligent professor, he was a key player that uncovered the truth. An unforeseeable flaw in the mastermind’s otherwise ‘perfect’ plan. The storyline was detailed and thoughtful; very different from other English language fiction, putting it high on my recommended list.

Strange Weather in Tokyo is a light-hearted romance novel about an office worker Tsukiko and her Sensei, whom she recognises from her school days. After bumping into him at her favourite local bar, they continue to see each other occasionally. Despite their 30-year age gap, slowly but surely, they form a unique connection.

I found it interesting how Kawakami describes the atmosphere in the scene, in between the dialogues between the pair. The novel is relatively slow placed, prolonging the intimacy and enhancing what would otherwise be ‘normal’ encounters. She makes Tsukiko seem more endearing as time goes by, and makes us empathise with her character and her charm.

The unlikely relationship between Tsukiko and her Sensei feels disjointed at first. As much as they enjoy each other’s company, they were hesitant to ‘cross the line’ so to speak. Rarely asking personal questions, they reveal very little about themselves to each other, in particular, Tsukiko about herself to the reader.

Another notable aspect that came into play was their large age gap, which may have been seen as taboo in Japanese culture at the time. Perhaps because of this, Tsukiko was more cautious in her approach, being that Sensei was more senior. Nonetheless, the experiences that they share build their emotional attachment to each other, all the while below the visible surface of the relationship. As the story continues to unfold, we see the couple warm up to each other and fall deeper into their alluring connection to one another.

The narration of Strange Weather in Tokyo is intricate but also lethargic at times, focusing on fine details of the scene that to others, may seem irrelevant but does add spice to the book. Although the leisurely pace of the novel is not something I’m always fond of, it worked really well in this instance and I found myself growing attached to the relationship between the two characters.

This book review was kindly sponsored by Osusume Books, which sent me their Bookworm Bundle package. Osusume Books pick the best Japanese literature, at random, ranging from romance to historical fiction to crime thriller novels (all written/translated to English). Each bundle differs, but the one I chose meant I would receive books from two genres.

I thoroughly enjoyed the surprise element, as it is unique to their subscription service, and would highly recommend Osusume Books to anyone looking to discover more Japanese authors.

30 Anime to Watch Before You Die!

Jasmine Cheung is a huge fan of Yayoi Kusama and watching all episodes of Terrace House back to back. 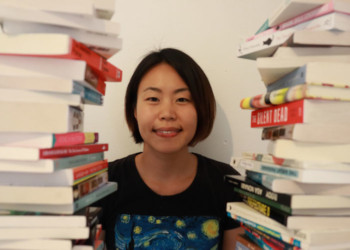